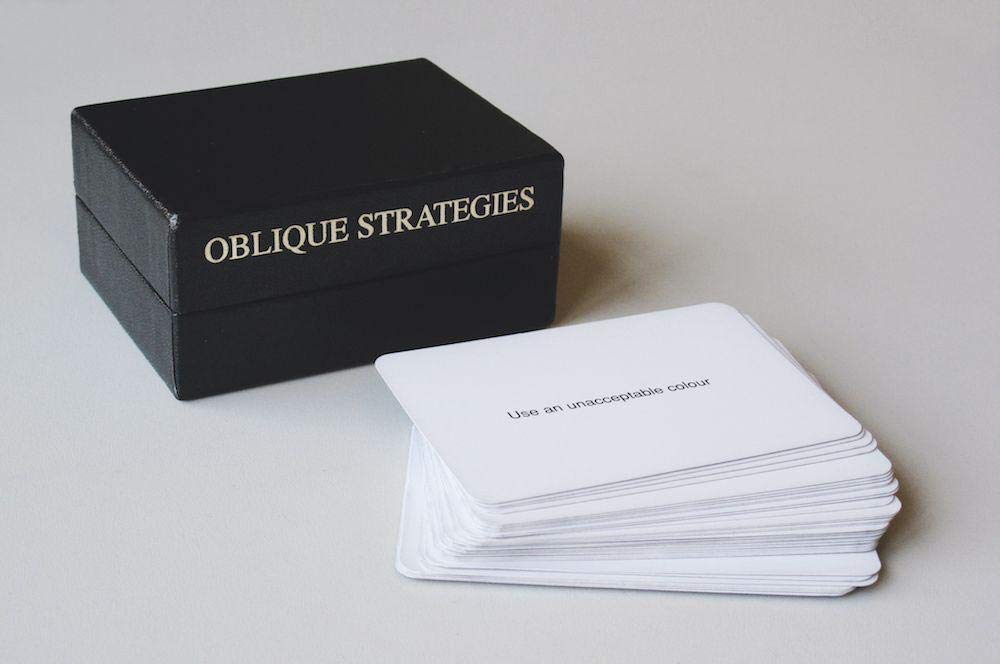 Have you ever been stuck?

In addition to stopping you in your tracks, getting writer's block or designer's block is a hard cycle to break.

What you need to do is find a way to work through the block. You need to engage your ability to solve problems creatively and in ways that are not immediately obvious.

This type of creative reasoning is known as lateral thinking.

Perhaps one of the most well-known lateral thinking hacks is a simple deck of cards with prompts created by musician/producer Brian Eno and artist Peter Schmidt.

These are known as Oblique Strategies.

Brian Eno famously used these cards in the recording studio, and you can use them as well in your creative endeavors.

Who is Brian Eno?

Brian Eno has been a fixture on the rock music scene since the 1970s.

He co-founded the art-rock band Roxy Music. Roxy Music was known for its glam esthetic, synths, and influence on the punk and new wave bands that followed in their footsteps.

"What could be more punk than Eno? A proud non-musician, he started out adding a series of abstract effects via then-new synthesizer technology and weird tape loops – applying outsider-music techniques to somewhat more conventional songcraft." — Nick DeRiso

Towards the end of the 1970s, he collaborated with David Bowie on the "Berlin Trilogy" albums, producing songs like Sound and Vision, Heros and Boys Keep Swinging.

They used the Oblique Strategies for ideas on some of the "Berlin Trilogy" recordings.

In addition to David Bowie, Eno produced many other artists, including Talking Heads, U2, Coldplay, and Devo.

He pioneered ambient and generative music with his solo career recordings, including Ambient 1: Music for Airports.

Okay, so Brian Eno is a fascinating dude. How can we apply some of his outside-the-box thinking could work in our creative workflows?

What is Oblique Strategies?

It starts with a black box with "OBLIQUE STRATEGIES" written on it. Inside is a deck of cards about the same size as a deck of standard playing cards.

Each card has one strategy prompt written on it.

Over the years, Oblique Strategies came in various formats, expanded, and reissued.

The first edition had 113 prompts. Later editions added some cards.

Here are some examples of some of the prompts:

How Do I Put Oblique Strategies to Use?

How do you make use of Oblique Strategies?

When you are stuck or in a creative rut:

Struggling through this is what will yield creative breakthroughs!

Below is a hilarious video that spoofs a Bowie/Eno recording session. Eno uses Oblique Strategies to "see what unexpected creative direction" it will take them in and proceeds to read the card with the prompt "Do like a made-up language that sounds kind of Italian."

It's ridiculous and funny, but I think it very much captures the spirit of how you need to think outside the box when working on a creative project.

The cards are still available online, you can check Amazon or dow some Google searches.

There are also some modern solutions:

So next time you are stuck, try some lateral thinking and pull out some Oblique Strategies to help work through the block. You might even want to play some of Eno's ambient music in the background for some additional inspiration.